I graduated from Milan’s Politecnico in 1980 with a dissertation on Schooling Residential Buildings alongside Arch. Marco Zanuso.
I then specialised through working in Marco Zanuso and Pietro Crescini Associati’s Studio until 1985, developing extensive experience in Architecture and Industrial Design.
During that period I took part in these projects: the new site for Milan’s Piccolo Teatro, the First Aid House “Spazio”, the automatic toilet “T-Matic” and the projectual contest for Techint’s Argentinian head office. 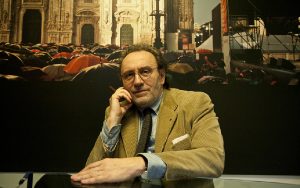 In the late 80s I started working on my own, dividing my work into interior design for private, interior decoration and furnishing and taking part in project groups for architectural competitions.
During these first years I worked alongside
– The studio “Francesco Trabucco e Marcello Vecchi Associati” – assisting in various architectural design and industrial productions projects
– The studio “Gianluigi Ghò” – collaborating in renewing the old ‘Kodak’ laboratories into their headquarters.

From 1988 up until 1991 I assisted Professor Constantino Corsini in his technical drawing course for the Engineering Faculty at Milan’s Politecnico.

In 1990 together with another architect, Vincenzo Vella, we founded our own company and worked together until 1998. Amongst the various interior design projects (both for private owners and companies’ offices) we had the following projects:
– designed residential, ecclesiastic and professional buildings in Argentina with the architect Oscar Vincente Garone
– worked for different brand chains and their shops
– collaborated in re-designing a line of automatic dispensers
– worked in the creation of complex multiplex cinemas

In 1998 I started what’s now the architecture and design “Studio di Architettura Riccardo Rocco”.
Lately I have held the position of President of the Urbanist commission in my neighborhood / area (2012-2016) and I work within The City of Milan’s Landscape commission.